Skip to content
HomeBoatsWhat is Port and Starboard on a Boat?

What is Port and Starboard on a Boat?

Port and Starboard are both nautical terms that are used to describe the left and right sides of a ship, boat or vessel. They are defined by an observer onboard the vessel looking forward with Port being to the left of the observer and Starboard to the right. 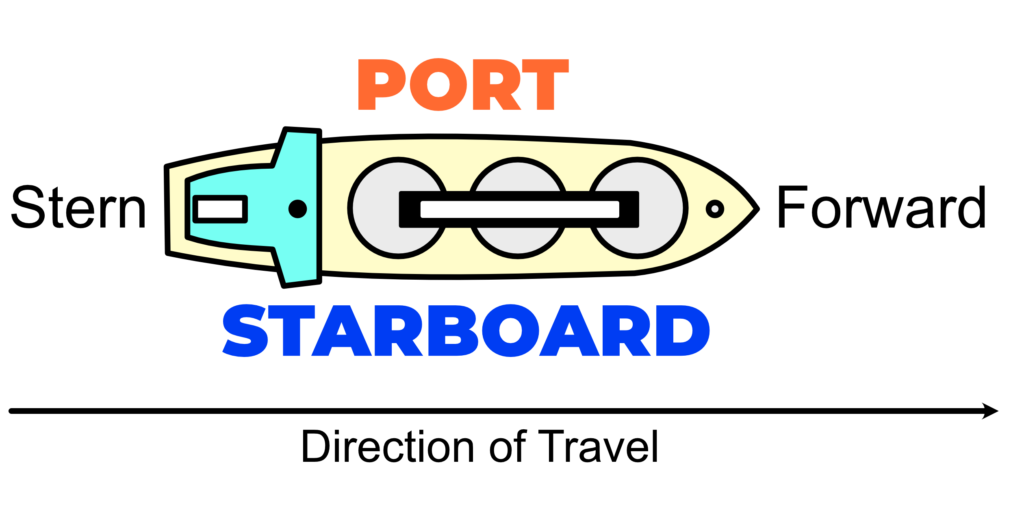 Why can't we just use Left and Right?

When giving commands aboard a vessel, you would often need to describe which area of the boat you are referring to, the left side or the right. The problem with using Left or Right is that those directions are from the point of view of the observer so can cause problems, for example, the left side of the boat is different when an observer is facing the front of the boat than when they are facing the back.

Where do the terms Port and Starboard come from?

There is an old English term ‘steorbord’, which means ‘steer-board’, ‘the side on which the ship is steered’. Although it’s now common for boats to have rudders on their centre lines, originally, they were steered with an oar. This steering oar was typically positioned at the stern of the boat on the right-hand side, because more people were right-handed. Other nations had similar terms such as ‘Steuerbord’ in Germany, ‘styrbord’ in Sweden, ‘tribord’ in France, ‘stuurboord’ in the Netherlands, ‘tribordo’ in Italy, ‘estribord’ in Catalan, ‘estibordo’ in Portugal and ‘estribor’ in Spain.

Due to the fact that the steering oar is on the right, the vessel would tie up at the wharf on the left. Hence it is called the Port side. If you look in the Oxford English Dictionary, you can see that it says the term Port has been in use since 1543.

We have only been using the term Port since the Royal Navy ordered it in 1844. Prior to that, the word Larboard was used. This is from the Middle English term ‘Ladebord’ with ‘lade’ related to the modern word ‘load’. The problem with Larboard is that it sounds very similar to Starboard so mistakes could be made if you misheard the order.

There is a record of an Anglo Saxon voyage which was carried out by Ohthere of Hålogaland that used the word ‘bæcbord’. This means ‘back-board’ for the left-side of the ship. The man using the steering oar on the right side, had his back to the ‘bagbord’ side of the ship which is Nordic for Portside.

By following the above convention, allows instructions and information to be given clearly, without needing to know which way any particular crew member is facing.

How do I remember the meaning of Port and Starboard?

Try to remember that Starboard means the ‘steering side’ of the boat and that most people are right-handed. So you know that Starboard is on the right.